Currents are a measure of the movement, or circulation, of ocean waters. Ocean currents carry water over long distances. To some extent, currents have identifiable properties, such as temperature and salinity, which allow them to be tracked back to their place of origin. However, as the current moves, it also incorporates some chemical and physical properties of the adjacent waters through which it is flowing. 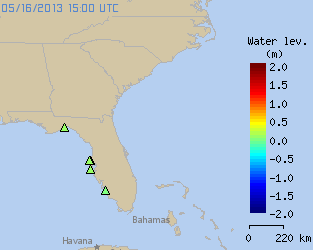 Currents can be classified based on where we find them. Those we can measure at the ocean surface extend down into the ocean interior, most often confined to the upper 400 meters of the ocean, though some of the strongest ocean currents can go much deeper. Deep currents found well below the ocean surface are very important in defining climate change over hundreds of thousands of years, and yet we know very little about them. The ocean is very big, and to describe the circulation requires current information at many locations and over long periods of time. 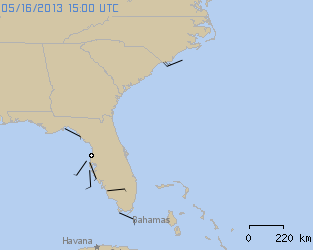 Two major forces drive ocean currents: pressure gradients and wind stress. Pressure gradients can be caused by differences in sea surface height, similar to water piling up on one side of a bucket. Changes in height are caused by wind blowing over water near a boundary. They can also be caused by density differences which occur due to differences in temperature or salinity. Another cause of pressure gradients is change in water surface slopes due to tides or waves. Wind-generated currents are the result of friction between the water surface and the overlying atmosphere. When the wind flows, it drags surface waters along with it. As surface waters move in response to the wind stress, energy is transferred to greater ocean depths, creating motion well below the ocean surface. 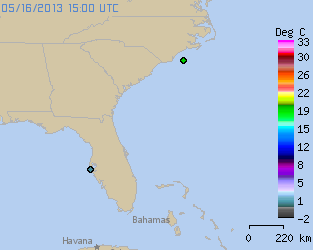